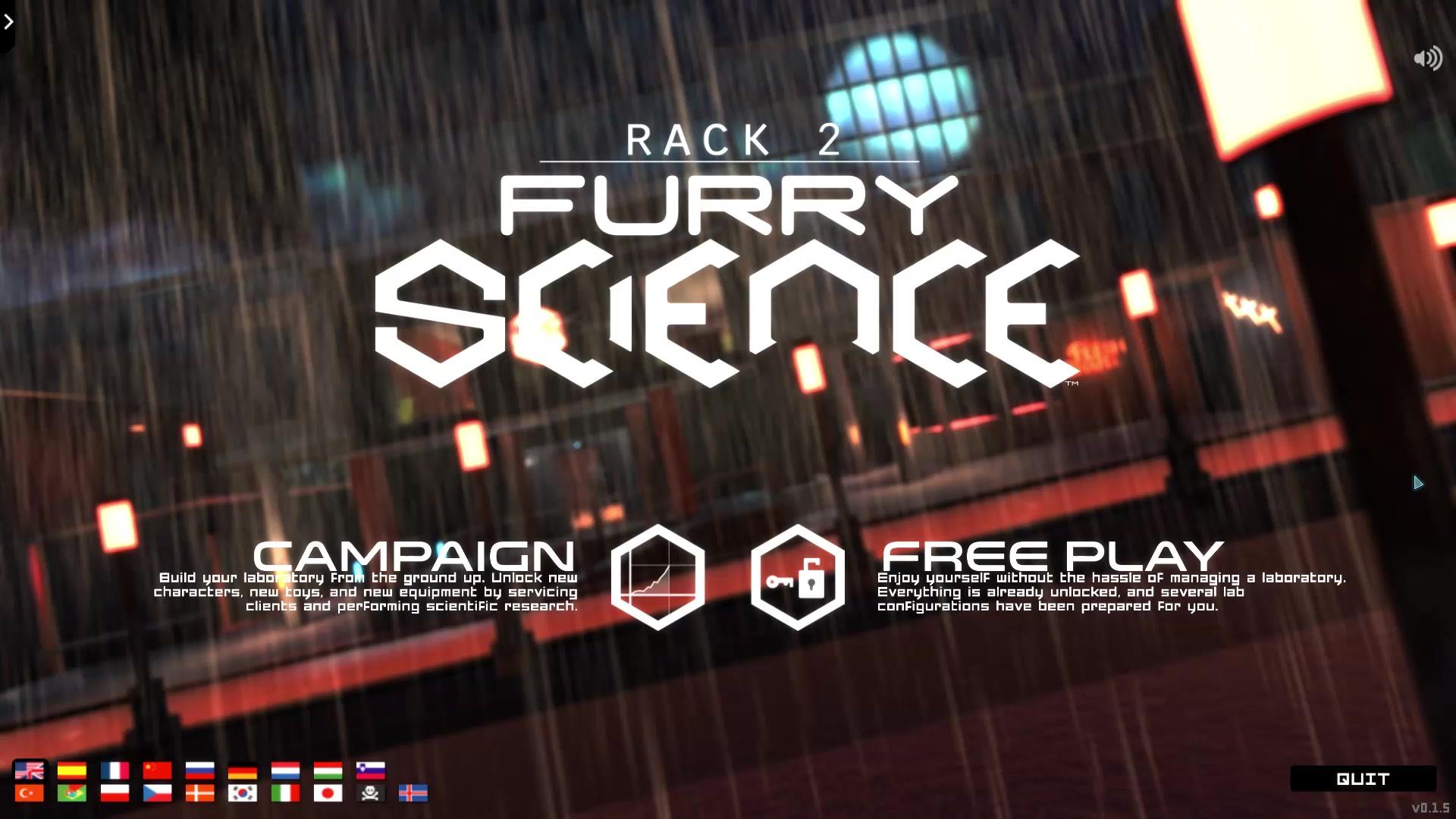 Rack 2 is a bondage-themed adult video game featuring predominately furry / anthropomorphic characters. You play the role of a scientist at Rack Laboratories, where you conduct sexual experiments for research and profit!

Rack 2 is a bondage-themed adult video game featuring predominately furry / anthropomorphic characters. You play the role of a scientist at Rack Laboratories, where you conduct sexual experiments for research and profit!

Rack 2's core gameplay is similar in nature to Rack 1. You will be presented with characters in science-themed bondage scenarios, and given a number of toys and gadgets to interact with them. Unlike Rack 1, Rack 2 will feature several different bondage poses and machines, and it will allow you to control a heavily-customizable scientist character, so you can pleasure your subjects personally in a fashion similar to Bedplay.

Because Rack 2 is being developed in 3D, you will have full control of the camera and viewing angles, including a first-person interaction mode and the ability to set up cameras throughout the testing environment for alternate views in real time. Like Midnight Fireworks and Bedplay, Rack 2 will have a method to automate your actions, while your hands are busy doing other things.

Like Rack 1, your laboratory in Rack 2 will begin with only the basics. As you play the game, you will gather specimen from your test subjects, which can be processed into chemicals and used to research new technology and equipment. After you've unlocked new technology, you'll purchase it using the proceeds from your scientific research, sex toy manufacturing, and pharmaceutical business. You can also earn additional revenue from clients who come to the lab seeking very specific sexual experiences. The happier you make them, the better they'll pay!

Rack 2 will feature the same types of sex toys and gadgets you encountered in Rack 1, including sciencey favorites like the portal devices, size modification tools, orgasm denial rings/paints, estim equipment, and fucking machines. It will also introduce several new toys catering to a number of new fetishes, along with the ability to own and use multiple instances of the same toy.

In addition to custom character support, Rack 2 also features a built-in character creation system that takes advantage of highly modular and highly flexible character elements. The game is built to handle a wide spectrum of character species, shapes, and sizes, and as the game is developed, the diversity of characters you'll encounter throughout the game will expand.

I want people to be able to create their own characters inside of the game, instead of commissioning me to make their character and add it to the game, like I did for Rack 1. I prefer spending my time working on new features and bugfixes, rather than making custom characters, and I know that's what my Patreon supporters would rather I spend my time on, too.

Rack 2 will allow you to customize:

In addition to your own playable character, the character generator will also be used to populate your clientele list with randomly generated characters. You will also be able to design lab assistants to help you carry out your scientific duties, and bioengineered test subjects who happily exist for the sole purpose of extended research.

In order to make sure nobody has unwanted fetishes shoved down their throat, all non-essential fetishes will be optional. Regardless of what fetishes do get added to the game, you will always be able to choose which fetishes (as well as character types/genders) you do and don't want to see in the game, and your progress will never be restricted because of a fetish or gender you've disabled.

Rack 2 will allow you to design your laboratory as you see fit. Machines, bondage equipment, and research stations can be placed anywhere in the laboratory, and you'll be able to light, decorate, and configure certain areas of the lab separately for a variety of different testing environments. Exotic test environments such as low-gravity and underwater will return in Rack 2. Lab configurations can be saved, loaded, and shared.

One of the core progression mechanics of Rack 2 is a new chemical research system. After you've collected specimen from your test subjects, you will be able to process it into six different chemicals. The type of chemical you earn is determined by how you're interacting with the subject. For instance, when a test subject is exposed to new and unfamiliar toys/fetishes, you will harvest a higher amount of felinium, or you can edge them over a very long session to earn a higher yield of equimine.

Using these chemicals, you will unlock chemical compounds that can be delivered to your test subjects via direct dosage or exposure to sex toys and accessories that have been treated with the chemical. These compounds allow you to control almost every aspect of a test subject's appearance and behavior, like their physical features, their sexual preferences and fetishes, their personality and emotional traits, and their body's sexual functions.

Compounds may initially come with side effects that you'll need to isolate and refine away. Once you've perfected a chemical, you'll be able to merge its effects with other chemicals to create custom drugs, which can then be used in the lab or sold for profit.

Like Rack 1, Rack 2 will allow you to load custom characters from anywhere, as long as they have been properly rigged and formatted to work with the game. Custom character artwork for Rack 2 can be created using Blender, which is completely free. I am doing all character modeling, rigging, and texture painting with Blender, and will release tutorials/explanations on the process once the game is closer to release. Character preferences and body type specifications can be edited using the game's built-in character customization tools or the text editor of your choice. Anyone supporting the game on Patreon at the $10 tier and up will also receive source files for characters I've created, which can be used as a starting point for new characters.

Games with same authors:
Rack
Rack is a science-themed bondage game where you can perform sexual tests and experiments using a variety of toys and gadgets. As you play the game, yo
Midnight Fireworks
Midnight Fireworks is a Fourth-of-July themed sex game with a cozy summertime atmosphere, an intimate POV perspective, and an optional autoplay featur
Bedplay
Bedplay is a bedroom-themed sex game featuring gorgeous artwork and voice talent by Kabier and Jasonafex. It features their ubiquitous characters, Ver
Games have similar tags:
Another Eidos Of Dragon Vein R
世界最強のエモノと化したキミを追いかけ回すタワーディフェンス！こんな××ゲー、見たことない！誰とでもデキる、ボーダレスラブストーリー！
The Cathouse Tale
Cathouse Tale is an adult game project featuring anthropomorphic characters. We are currently working on expanding our character customizer and adding loads of new animations, as well as getting started on the actual sex scene gameplay. Our long-term goal is to make something that sets a new standard for x-rated fantasy game content.
The Pirate's Fate
Embark on a swashbuckling adventure in The Pirate's Fate, a visual novel experience with a unique twist: the story, the crew, and who you are transform based on your choices. Seek treasure, find love, and choose your fate.
Comments (0)
Login
Write the first comment!
Sitemap
HomeGame ListAuthor ListTag List
Languages
English简体中文繁體中文日本語
Feedback
Site Status