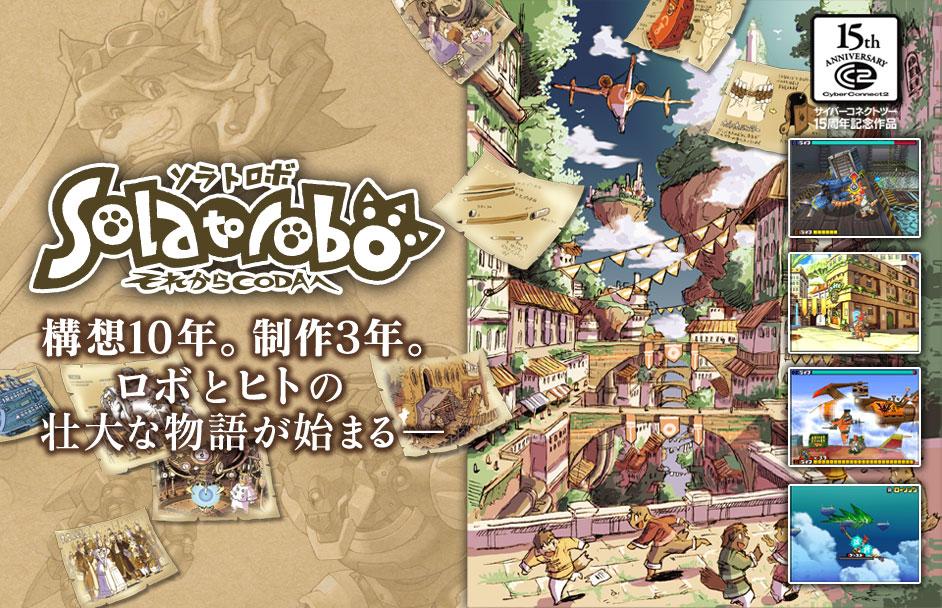 Red Savarin, an eager and ambitious 17 year-old anthropomorphic dog, ventures through the mythical floating islands of the Shepherd Republic where specialized robots are commonplace, living a carefree life traveling with his younger sister, Chocolat, and utilizing his personalized robot, Dahak, to complete various odd jobs for money. While on a routine retrieval mission, they have a chance encounter with a mysterious boy named Elh and find a medallion that inadvertently entangles Red in something much more than he bargained for. Having taken Elh under his care, Red investigates the mystery surrounding the young boy and the strange object as he takes on monsters, sky pirates and evil robots on his road to becoming the reluctant hero that must save the world from a swiftly awakening evil.

Solatorobo: Red the Hunter is an action role-playing game taking place in the Shepherd Republic, a nation high in the skies consisting of numerous floating islands. As Red, the player utilizes his personalized robot to pick up heavy items and enemies, catch and throw back projectiles, glide through the skies, and even fish for monsters. Gorgeous visuals and an amazing soundtrack bring the aerial world to life as players complete the more than 70 quests to gain the resources needed to upgrade and prepare their robot for the epic struggle to save the world from the evil about to be unleashed upon the land.

Games with same authors:
Fuga: Melodies of Steel
Fuga: Melodies of Steel is an RPG where you place children, each with their own unique characteristics and skills, at different gun turrets in a tank to fight against the enemy.
Tail Concerto / テイルコンチェルト
Dogs and cats inhabit the world of Prairie. The dogs are the dominant group and have denied the cats representation in the government. The Black Cats
Games have similar tags:
Super Animal Royale
It’s a fight for furvival! Super Animal Royale is a 64-player, frenetic, top-down 2D battle royale where murderous animals fight tooth, claw, and machine gun across an abandoned safari park.
Undertale
UNDERTALE! The RPG game where you don't have to destroy anyone.
Dust: An Elysian Tail
Immerse yourself in a gorgeous hand-painted world on a search for your true identity. As the mysterious warrior, Dust, your action-packed journey will take you from peaceful glades to snowy mountaintops and beyond.
Stories: The Path of Destinies
Stories: The Path of Destinies is an Action RPG, an enchanted storybook filled with madcap fantasy tales, each told by a zippy narrator attuned to the player’s choices and actions.
Comments (0)
Login
Write the first comment!
Sitemap
HomeGame ListAuthor ListTag List
Languages
English简体中文繁體中文日本語
Feedback
Site Status