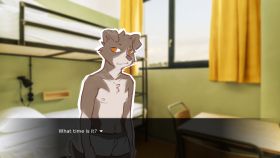 Spencer, a college freshman and chronic insomniac, struggles to keep his new life together. Three weeks in and he's all but given up on making new friends, having new experiences, and everything else the recruiter claimed he could expect. Nothing seems right that morning. He oversleeps, gets denied entry at the school's gates, and only manages to sneak in thanks to a sophomore he'd never met. On school grounds, things don't seem any better. A student had been murdered, and Spencer is forced to investigate when it becomes apparent that the victim was him.

Games have similar tags:
The Human Heart
You are a human, with a heart longing for a partner. Will you find your love amongst the mammals in this new yet familiar world?There are seven lad
Psychic Connections
Psychic Connections (PC) is a romance visual novel set in the fictional college town of Elmwood. Upon arrival, you will be inducted into a secret support group for the local psychics in this supernatural slice-of-life.
B101
B101 is a homoerotic visual novel made with Ren'Py, that puts you in place of a newly-graduated commander who gets sent to a secret base in a frozen d
I Promise
Scott with his classmates went to a little Cristmas travel. They're up for great recreation, skiing, tubing, snowboarding and much more! But are that
This game is an ongoing project.
Support Languages:
English
Tags:
type:visual-noveltype:baraspecies:deerspecies:catspecies:dog
Links:
Get on Itch.io
Official Patreon
Official Twitter
Contributors:
FurryGamesIndex
Sitemap
HomeGame ListAuthor ListTag List
Languages
English简体中文繁體中文日本語
Feedback