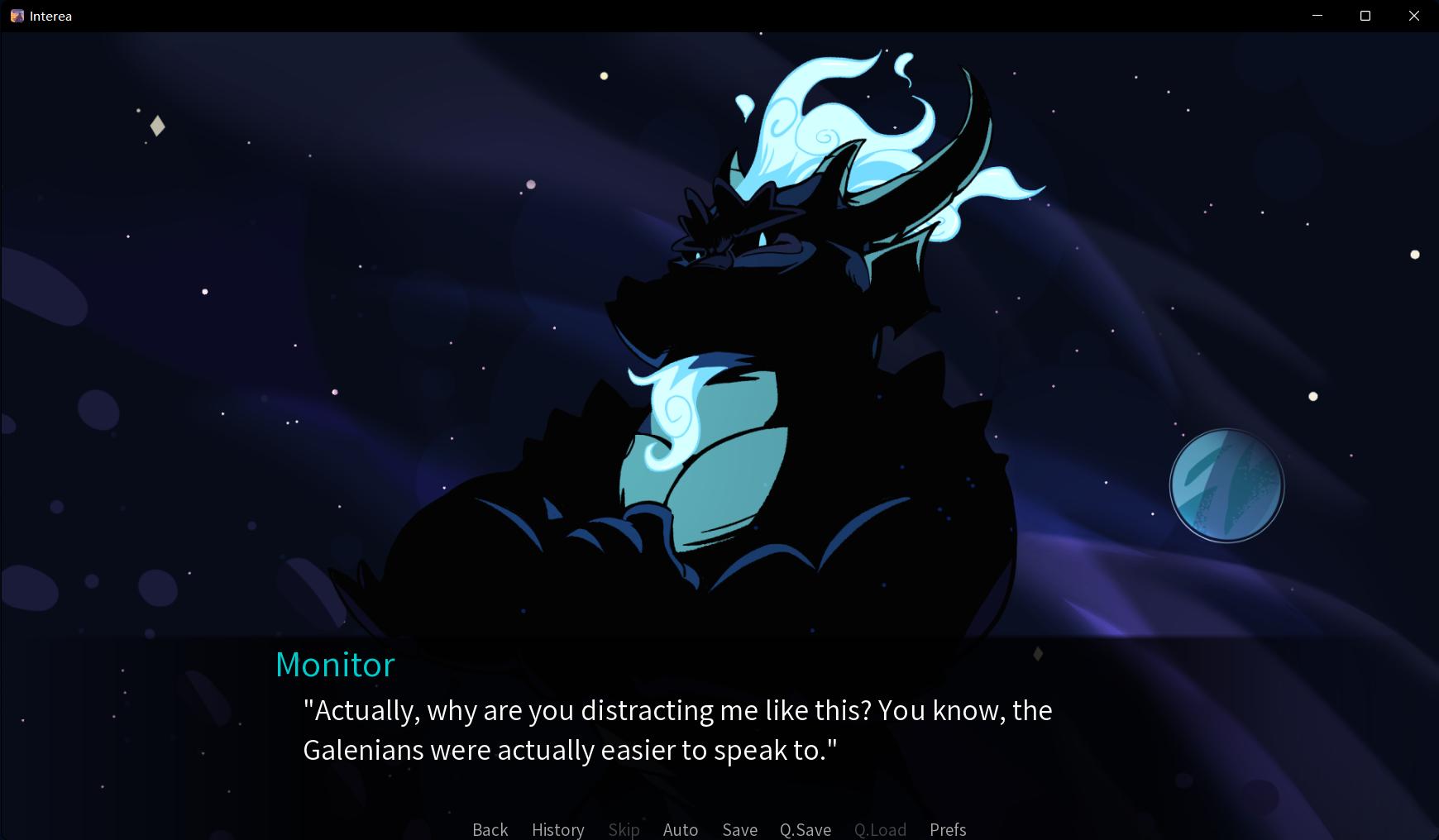 A companion visual novel to Adastra...

A companion visual novel to Adastra.

This game will center around the player character's tour of the moon with Amicus, the events of which took place off-screen near the end of Adastra. This is something I've considered doing for a while as I've tended to agree with the audience's concern that Amicus and his human didn't have enough time to really spend together amidst the fast-paced nature of the story. I also feel that there was a lot more to say about the culture and history of Adastra that wasn't explored in the original VN. There will certainly still be an overarching narrative involving some tension and conflict, but I think many of you will enjoy seeing these characters in situations in which there is room to breathe and relax, though not completely (especially with Alex and Cassius along for the ride).

Games with same authors:
Echo
During spring break, Chase, a young otter who grew up in Echo, is back for a school project aimed at documenting an event in the 1870's that may have lead to the town's current state. He's joined by five friends, who grew up with him in Echo, taking the chance to have a little reunion. Unfortunately, Chase begins to realize that their memories of Echo may have been a bit rose-tinted. Being back in the town digs up old and painful memories; secrets that lead to rifts in the group that have been boiling under the surface for years.
The Smoke Room
Moving to the town of Echo was a bad idea. Trusting someone he barely knew was an even worse one. The Smoke Room tells the story of Samuel, a sex worker in the town's most infamous brothel. After making the biggest mistake of his life, Sam will struggle to keep it a secret. He comes to realize however, that doing so might be impossible...Echo itself seems to know what he's done, and it's not keen on letting him forget.
Khemia
Things have changed quite a bit on Adastra. The Human's arrival has altered the political course of the entire galaxy. After his departure, the friend
Adastra
It all starts while you're having the time of your life in Rome on a study abroad program. Just as you're settling in, you're suddenly abducted by an alien. What does he want from you? Well, he doesn't seem to want to tell you, and before you know it, you're millions of miles away from Earth on your way to an empire you know nothing about. It's a climate of turncoats and backstabbers, and you start to wonder if the alien that abducted you is the one person you can trust the most.
Echo: Route 65
The story of the Echo: Route 65 visual novel is centered on the protagonist, Chase, a teenager in the rural southwest whose parents just found out he
Smoke Room Christmas
Hey folks. George here. Happy Holidays! Have a surprise build as a holiday gift from us to you!This is an AU version of the smoke room in the moder
Arches
Arches is a standalone story that takes place after the events of Echo. A couple visit Echo to do some paranormal investigating, the town now abandoned five years after the mass hysteria. Despite this, something evil still lurks in the town, evil enough that it's kept the horrors alive.
Games have similar tags:
Homecoming ~Morenatsu Revisited~
In Homecoming, you take on the role of a young Japanese snow fox named Hiroyuki Nishimura. After moving away from your hometown Minasato to Osaka five years ago, you receive an unexpected letter from an old friend inviting you back for one last summer vacation before completing your senior year of high school. What complicates things is how you've neglected to contact any of your friends over the years. Although nervous, you accept the invitation.
Hero's Advent
Hero's Advent is a romance-fantasy visual novel set in another world. Suddenly pulled into a new dimension, you're transformed into a furry. Upon waking up, you met Alisa the rabbit, who told you this world was in grave danger and that only you could free the land from the Evil King's grasp.
The Delta Academy
Hey There!I'm Healer Main and I'm in the process of creating a visual novel themed on a magical concept I've had floating around my brain for ye
Morenatsu / 漏れなつ。
The game takes place during summer vacation in Japan.The protagonist-player, a human, gets a letter from a friend in the village where he spent his
Comments (0)
Login
Write the first comment!
Sitemap
HomeGame ListAuthor ListTag List
Languages
English简体中文繁體中文日本語
Feedback
Site Status