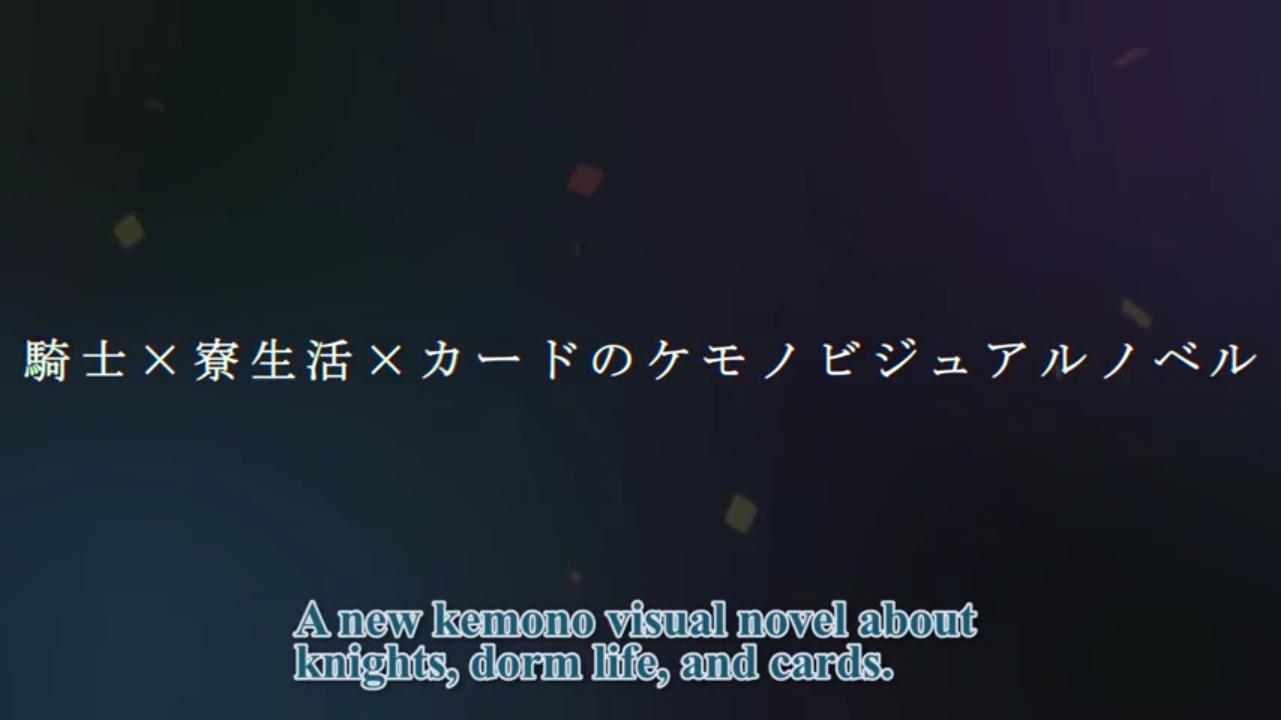 Knights College is an adult kemono visual novel set in a dormitory where elite knights-in-training live. In this game, the cards the main character collects as he lives in the dormitory will present all possible choices.

Knights College is an adult kemono visual novel set in a dormitory where elite knights-in-training live.

In this game, the cards the main character collects as he lives in the dormitory will present all possible choices.

One day, a young man named Argo, who had been living a carefree life in a rural fishing village, receives a recommendation letter from an unexpected place.

It was from an elite training institute known as the “Knights College“.

The reason for the ordinary fisherman’s son’s recommendation is the special “cardification” ability sleeping within him.

And so Argo sets off to live at the Knights College as he learns to use his ability.

Living in the Knights College are students from the country of Frontail, where Argo is from, as well as students studying abroad from Frontail’s rival country, Harshreich.

There are many people living at the Knights College, including the professors in charge of lectures and training, as well as the dragon, the guardian deity of the country.

The choices Argo may make are represented by all the cards he currently has in his possession.

The more cards you have, the more places you can go and the more you can communicate.

In order for adult scenes to appear, the R18 patch must be applied. You can find it on the official website.

Games with same authors:
Lagoon Lounge 3 ~ Irori no Lagoon / 囲炉裏のラグーン
This is the full English translation "Final" of the LAGOON LOUNGE series.Go to the hot spring, celebrate Christmas.Multi-endings (Ending will ch
Lagoon Lounge ~ Himitsuri no Lagoon / 秘密裏のラグーン
The story of protagonist Kuugo, visitor to a village afflicted by a strange phenomenon, where there is a poison in the fountain.
Lagoon Lounge : The Poisonous Fountain
This is a visual novel containing furry characters and homosexual themes. You take on the role of a furry who has moved to a seaside village and become involved in the lives of its residents.
Lagoon Lounge 2 ~ Yaneura no Lagoon / 屋根裏のラグーン
The story of protagonist Kuugo, who lives a secret life in the outskirts of a village with the lion he has adopted and protects.
Chardonnay Romacia
In an idyllic town frequented by Heroes, there is a small guesthouse called the Grapes Inn that's (in)famous for a particular reason:"Feel free to f
Games have similar tags:
Pervader
Pervader is a plot-heavy kinetic visual novel set on an island-continent which has its own history, myths and secrets. You play the role of Reamus, a
Another Eidos Of Dragon Vein R
世界最強のエモノと化したキミを追いかけ回すタワーディフェンス！こんな××ゲー、見たことない！誰とでもデキる、ボーダレスラブストーリー！
Rack2: Furry Science
Rack 2 is a bondage-themed adult video game featuring predominately furry / anthropomorphic characters. You play the role of a scientist at Rack Laboratories, where you conduct sexual experiments for research and profit!
Homecoming ~Morenatsu Revisited~
In Homecoming, you take on the role of a young Japanese snow fox named Hiroyuki Nishimura. After moving away from your hometown Minasato to Osaka five years ago, you receive an unexpected letter from an old friend inviting you back for one last summer vacation before completing your senior year of high school. What complicates things is how you've neglected to contact any of your friends over the years. Although nervous, you accept the invitation.
Comments (0)
Login
Write the first comment!
Sitemap
HomeGame ListAuthor ListTag List
Languages
English简体中文繁體中文日本語
Feedback
Site Status